UArizona Startups Generate Over $585M in Impact in Three Years

TUCSON, Ariz. – Tech Launch Arizona, the office of the University of Arizona that commercializes inventions stemming from UArizona research, has released the results of a study announcing the economic impact of the work of TLA and the university’s startups. The study, conducted by the McGuire Center for Entrepreneurship at the Eller College of Management, analyzed the impact of those university startups launched from 2016 through 2018. 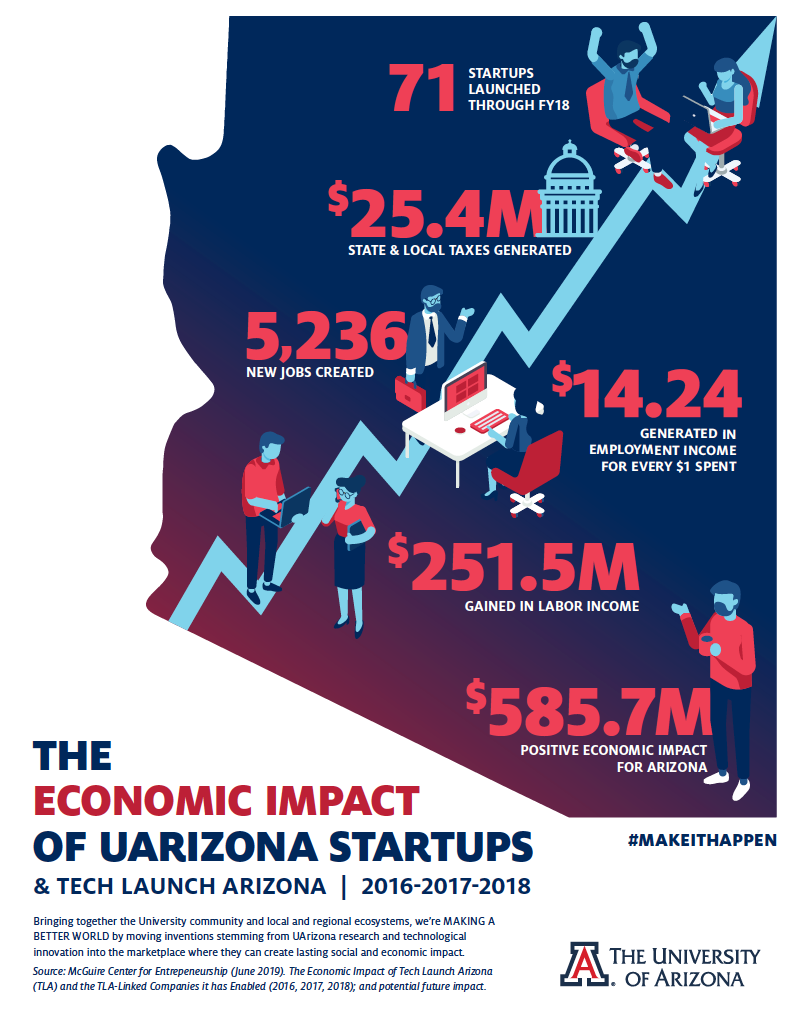 Top findings of the report indicate that the 71 startups UArizona launched through FY2018:

Among those startups working to bring to market inventions are: FreeFall Aerospace, commercializing intelligent antenna systems developed at the Steward Observatory and Department of Astronomy; Regulonix, bringing to market non-opioid medications for chronic pain developed at the College of Medicine – Tucson and the BIO5 Institute; Lunewave, developing cutting-edge automotive radar sensing developed in the College of Engineering; and Clean Earth Tech, developing a solution to control harmful airborne dust advanced via research at the College of Engineering and BIO5 Institute.

“TLA was created to maximize the impact of UArizona-invented technologies for our community, our state and the world,” says Assistant Vice President of Tech Launch Arizona Doug Hockstad. “We’re highly metrics driven and have been focused on growing our numbers since the office was formed in late 2012. This new study objectively demonstrates our impact. We’re very excited about these results and look forward to continuing to grow in all these areas.”

By the University’s definition, a startup is a company founded to commercialize a technology invented by UArizona employees – such as faculty, staff or graduate students – and has licensed the intellectual property for the invention from the University.

UArizona has created 164 startups since 1984; over 90 of those have occurred since launch of TLA in 2012. Of those, 82 are still in business, and 73 are operating in Arizona. These numbers continues to grow as the office continues to seek out opportunities to commercialize research.

“We work hard to surround our startups with support to help them be successful from the beginning,” says Hockstad. “From our I-Corps customer discovery program to our four amazing Mentors-in-Residence to providing Asset Development funding, we’ve worked hard to bring all the pieces together to give startups a healthy footing as they move out from the University and into the community. In the end, we want these businesses to create new jobs, attract new resources to our region, and make the world a better place.”

Greg Watson, a lecturer at the McGuire Center for Entrepreneurship, oversaw the study and wrote the report.

The results of the economic impact report are included in TLA’s FY2019 Annual Report, available online. The office has also produced an infographic to report the impact of UArizona startups.