Virtual program brings entrepreneurial teams from 8 institutions together to maximize the impact of university inventions.

TUCSON, Ariz. – In February 2023, the National Science Foundation will host its first cohort of teams for the re-envisioned NSF Innovation Corps or “I-Corps” program. In 2016, the University of Arizona, with Tech Launch Arizona – the university’s commercialization arm – at the lead, was designated as an I-Corps Site, receiving funding and programming to train researchers in bringing promising ideas from the laboratory to the marketplace. Now 6 years later, the NSF has re-launched the program and re-envisioned its National Innovation Network as consisting of 10 regional hubs. Each hub will offer its program virtually to cohorts of teams hailing from all of its member universities, providing a robust, diverse experience for participants.

In 2011, the National Science Foundation launched the I-Corps program to teach teams – each consisting of a principal investigator, an entrepreneurial lead, and a business mentor – how to use the customer discovery process to quickly assess the market potential of their inventions. As they go through the 5-week experience, each team works to break down the stories of its complex technologies into brief, understandable pitches. Teams also learn how to do effective customer discovery interviews to develop a clearer understanding of how they can position their inventions for maximum impact in the marketplace.

“The goal,” said PhD student Joel Berkson, “is to thoroughly understand whatever problem we're trying to tackle – whether it's at a startup or at a large company or in life in general – and then figure out how to solve that problem in the best possible way.”

Berkson, who is in his 4th year at the James C. Wyant College of Optical Sciences and the Department of Astronomy and Steward Observatory, said that was the biggest takeaway from his recent experience going through the I-Corps program at the national level.

He and his colleague, senior research associate Justin Hyatt, co-invented software for the rapid measurement of surfaces like the curved panels used for antenna and radio telescope dishes.

Berkson and Hyatt brought the invention to TLA early on in their work. Once Berkson disclosed the invention to the TLA team, the office then went to work filing patents for the technology, and helped the team develop strategies to launch their startup, Fringe Metrology, to bring it to the marketplace.

As the worldwide need for high-speed communications increases, industry is developing better and faster ways to create the ground- and space-based radio antennas that will facilitate high data rates. Fringe Metrology aims to fill this need by providing a highly-needed service for companies that manufacture these antennas. Their methodology is also applicable for measuring spacecraft materials, and rough glass surfaces – any application where challenging surfaces need to be measured with a high degree of accuracy.

Traditionally this type of measurement has been done by using stickers to mark points on the object and then taking digital images from which researchers can re-construct 3D information about it. The system Berkson developed uses a laser projector to place millions of points on a surface that can then be used to create a highly accurate 3D model that can then be compared to the ideal shape. Because it uses projected points of light instead of stickers, the new method is a no-touch solution that is more accurate and eliminates the risk of damaging the object being measured.

It can currently be used to measure objects up to 2.5 by 2.5 meters with a high degree of accuracy: less than 15 microns, or about the width of a grain of talcum powder. Their solution is also fast, delivering results in 5 minutes as opposed to the many hours required by other standard methods. But just because the technology outperforms the competition does not necessarily make for a successful, scalable business; those are lessons Berkson learned through I-Corps.

“The best thing about the I-Corps program was making connections with customers in the radio antenna space since that’s going to be our target market,” said Berkson. “We learned that it’s a very small market, but there’s definitely enough volume and opportunity there to support our small business.”

Through the customer discovery interviews he and Hyatt conducted, they learned that while the market isn’t robust enough to scale their company up to hundreds of employees, they could certainly grow to employ between 20 and 50 people, providing high-salary, high-tech jobs for the region.

“As we launch more and more startups, more and more of those startups will be successful,” said TLA associate vice president Doug Hockstad, “and as that success grows we'll have startups, we'll have medium-sized companies, we’ll have large companies, and we'll create an ecosystem that will support its own growth as well as support essentially students graduating, staying in the local area, and then taking the risk because they know there's somewhere else to land in the ecosystem.”

Berkson is planning on graduating in May 2023. He and Hyatt are also working on a Phase 1 SBIR application, which will help fund the next phase of growth for Fringe Metrology and give Berkson the first stepping stone of his career as CEO of a small high-tech company. It is a risk, but with TLA’s help, the learnings from their I-Corps experience, and a healthy surrounding innovation ecosystem, he and Fringe are off to an excellent start.

“I hope I can help push the program with people as much as possible,” he said. “Everyone I talk to says they’re building some cool technology, and I tell them to go do I-Corps, even if you don't want to start a company. Go do it, because you'll learn a lot about being an entrepreneur and about yourself.”

All told, Tech Launch Arizona has had just under 200 teams go through the university’s I-Corps program since it was first awarded the NSF I-Corps Site designation in 2016. Eleven teams commercializing UArizona inventions have gone on to participate at the national level. Applications for the next I-Corps cohort are now open for the next cohort. Program information and applications are in the I-Corps section of the TLA website. 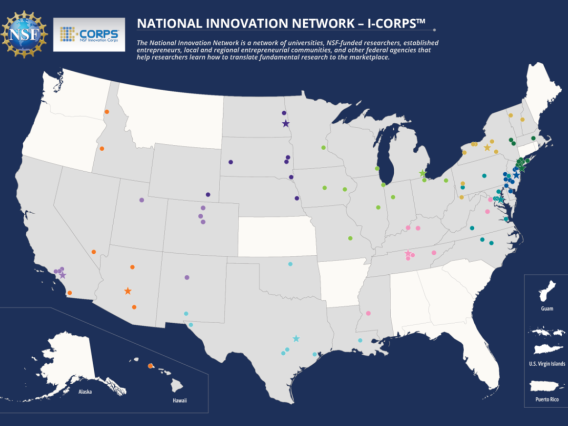 The inaugural Desert and Pacific Region I-Corps Cohort will begin on Friday, January 27 and run each Friday until February 24.

What do you do with an early-stage invention? Move it forward with Asset Development funding.