TUCSON, Ariz. – On October 11, 2022, Tech Launch Arizona, the office of the University of Arizona that commercializes inventions stemming from research, hosted its ninth annual I-Squared Awards and Expo event. Along with honoring the top inventors, entrepreneurs, and community leaders dedicated to commercializing UArizona inventions, the evening began with an expo of UArizona inventors and startup teams. It also included a special celebration commemorating TLA’s 10th anniversary and the presentation of awards.

In the 10 years since the office opened, TLA has worked with nearly 2,500 UArizona invention disclosures, executed over 490 licenses for companies to take university inventions into the marketplace, and launched over 120 startups. Through TLA, UArizona has grown into a leader other universities look to as a model for excellence and best practices in technology commercialization.

An economic impact report TLA released earlier this year indicated that the work of TLA has supported a total of over 2,500 jobs and, between fiscal year 2017 and 2021, the office and its related activities generated an economic output of $1.61 billion.

That report, along with many other stories about TLA’s accomplishments over the years, have been captured in a special report in the Fall 2022 edition of BizTucson focused on the 10-year history of the office, which was officially released at the event.

UArizona President Robert C. Robbins offered his comments ahead of time in a recorded video, and Senior Vice President of Research and Innovation Elizabeth “Betsy” Cantwell, and Associate Vice President of Tech Launch Arizona Douglas Hockstad were there to present the I-Squared awards.

“Ten years is not very long for tech transfer in a major world rank university like the University of Arizona,” Robbins said in his video, “and TLA has done an incredible job in that time to help build a strong and growing culture around innovation, commercialization, not just on campus but throughout the region.”

Cantwell highlighted the contributions of the TLA team in her comments.

“Tech Launch Arizona has had an amazing 10-year run delivering on a bold vision for what all we can deliver to the state of Arizona and its people through innovation and tech transfer,” she said. “I have immense gratitude for TLA’s staff and their ability to, year after year, drive and grow a culture of commercialization at the University.”

Hockstad noted that the office’s success is due to the culture of service and impact that every team member carries through their work.

“We now have people around Tucson, around Arizona, and around the world who are interested in and support what we're doing to get university inventions commercialized and out into the marketplace where they can impact lives,” he said. “Everyone in the office knows and understands that we are built on our relationships with our faculty with the constituents in the community. It is the highest priority of everything that we do and we do it really well.”

Inventor of the Year: Robin Polt

The Inventor of the Year award honors a UArizona innovator who has demonstrated a significant commitment to commercialization throughout their career, with a focus on activity in the past year. Robin Polt is a professor of chemistry and biochemistry at the College of Science and the College of Medicine – Tucson, and is also a member of the BIO5 Institute. His research focuses developing novel synthetic methods for amino acids and glycopeptides, which are amino acids that have sugars – carbohydrate groups – attached to them.

In his time at the UArizona, Polt and his colleagues have launched two startups to commercialize inventions he has co-developed: GlycoSurf and, just in the past year, Teleport Pharmaceuticals.

The Startup of the Year award is given to the startup that has, in the past year, had the most impact or significant activity. Aqualung Therapeutics is a biotech company with an anti-inflammatory and anti-fibrosis therapeutic platform for serious unchecked inflammatory and fibrotic disorders. The company was formed to commercialize a therapeutic antibody to treat ventilator-induced lung injury, invented by Joe G.N. “Skip” Garcia, at the time of the College of Medicine – Tucson.

Most recently, the company has been awarded two 3-year NIH FAST-TRACK AWARDS to support the development of ALT-100, a humanized monoclonal antibody (mAb) therapy for the chronic indications of Pulmonary Arterial Hypertension (PAH) and Inflammatory Bowel Disease (IBD). The ALT-100 mAb targets the inflammation-inducing damage-associated molecular pattern protein eNAMPT, and is currently in Phase 1A human safety trials.

“Success (in a biotech startup) is based on four elements: a good, novel target; good preclinical evidence; good intellectual property; and a good team,” said Stan Miele, who accepted the award on behalf of the company and said he saw all those things in Aqualung Therapeutics. “I’m super excited about the journey that we have ahead of us with our human clinical trials.”

The Student Innovator of the Year award is reserved for the student who over the last year has shown excellence in commercialization and intellectual property, with a focus on entrepreneurship. Joel Berkson, a fourth-year doctoral student at the University of Arizona James C. Wyant College of Optical Sciences and Steward Observatory, has developed a new way for precisely measuring radio antenna surfaces which are used to collect and focus radio waves for astronomy and satellite communications.

TLA, in collaboration with Berkson and co-inventor and Senior Research Associate Justin Hyatt, patented the technology on behalf of the university and licensed it to Berkson’s startup, Fringe Metrology.

“I'm really excited about the technical and entrepreneurship culture developing here in Tucson,” said Berkson. “It's really accelerated lately, so that's exciting and I'm very grateful and honored to be a part of that.”

Campus Collaboration: The Office of the Provost

The Campus Collaboration award honors a person or entity within the UArizona whose contributions to commercialization have demonstrated great impact, with emphasis on the last year. This year’s honoree, the Office of the Provost, led by Senior Vice President for Academic Affairs and Provost Liesl Folks, has been a great champion for innovation and commercialization. Their activities have supported the growth of a culture of innovation across the university, and have helped to inspire the faculty and researchers to see their work more in light of the impact it can create.

Each year, the Office of the Provost offers faculty awards and honors covering a variety of categories, from early career scholars to distinguished professors. In 2021 the office designated a new category of awards for “University Innovation and Entrepreneurship” to promote the translation of research to the public for the benefit of society. The awards honor those who have demonstrated significant involvement in expanding the impact of research to the public good through innovation and commercialization and will be awarded annually by the office going forward. The office is also advocating at the national level to embed criteria such as invention, patents, and startups in the promotion and tenure review process.

Vice Provost Andrea Romero accepted the award on behalf of the office.

“This is the kind of stuff that she (Folks) lives for. You know she's a Fellow in the National Academy of Inventors and has an impressive number of patents to her own name,” she said in her comments to the audience. “Entrepreneurship is one of our priorities for this year, so we’re really trying to embed that in every way we can.”

This award is reserved for a person or entity outside UArizona whose contributions have generated maximum success for university inventions and startups over the last year and over time. Through its Entrepreneurship Program, the Flinn Foundation has helped a number of UArizona startups move forward towards success, including NeuTherapeutics, SaiOx, uPetsia, Botanisol Analytics, Scintillation Nanotechnologies, GenetiRate, Avery Therapeutics, and Reglagene.

“We are so pleased to have this honor, and congratulations to Tech Launch Arizona on 10 years,” said Stacy Tucker, vice president and chief financial officer of the foundation. “This (TLA anniversary) happens to coincide with the Flinn Foundation’s Arizona Biosciences Road Map and its 20-year anniversary. In both instances, it's a lot of ‘think big start small’ and look where we are today.”

The Biosciences Road Map represents Flinn’s longstanding, impactful work in elevating the visibility of the Arizona biosciences ecosystem. The map is a strategic plan to turn research into practice, develop biosciences talent and entrepreneurship, and promote a convergence of research, health care, and commercialization.

The David N. Allen Award is given to an individual who has exhibited a lifetime of contribution and dedication to UArizona commercialization and improving the innovation ecosystem in Tucson. Hecker has served on the TLA advisory board and has contributed his expertise toward helping TLA as an organization as well as the entire entrepreneurial community evolve and grow. He has served on numerous boards and committees including the TREO Economic Blueprint Steering Committee, IdeaFunding (co-founder), and Sun Corridor. In his law practice, he focuses on corporate and general business law, startups, mergers, and capital formation transactions, and has provided services to help many university startups through their launches. Hecker received both his Bachelor of Arts (1969) and his Juris Doctor (1972) from UArizona, and continues to teach law and entrepreneurship as a Professor of Practice.

“The formation of TLA the arrival of Dave (Allen) and Doug (Hockstad) and the TLA team was one of the most significant events in economic development in southern Arizona,” said Hecker. “We moved from an economy that was dependent on depleting resources, whether it was copper or developable land, to one that was based on renewable resources – ideas, technology, and people. That's what it takes to build a strong sustainable economy.”

TLA also presented a special award to Eugene Gerner, professor emeritus of the College of Medicine – Tucson and founder of Cancer Prevention Pharmaceuticals, a startup launched to advance therapeutics to reduce the risk of cancer and other diseases. The company was launched in 2008 and was acquired this past year by Panbela Therapeutics.

In his comments, Gerner thanked Hecker, who helped him launch the company, as well as Tod McCauley, TLA Assistant Director of Licensing for the College of Agriculture and Life Sciences, who worked with Gerner and the company on intellectual property underlying the business.

In May, TLA released the results of its recent economic impact report, which indicated that startups and businesses generated through the office supported over 2,500 jobs and $561 million in labor income between fiscal years 2017 and 2021. TLA has produced over $1.6 billion in economic activity since 2016. Since the formation of TLA a decade ago, the number of new UArizona startups has nearly tripled, from 73 to over 200. 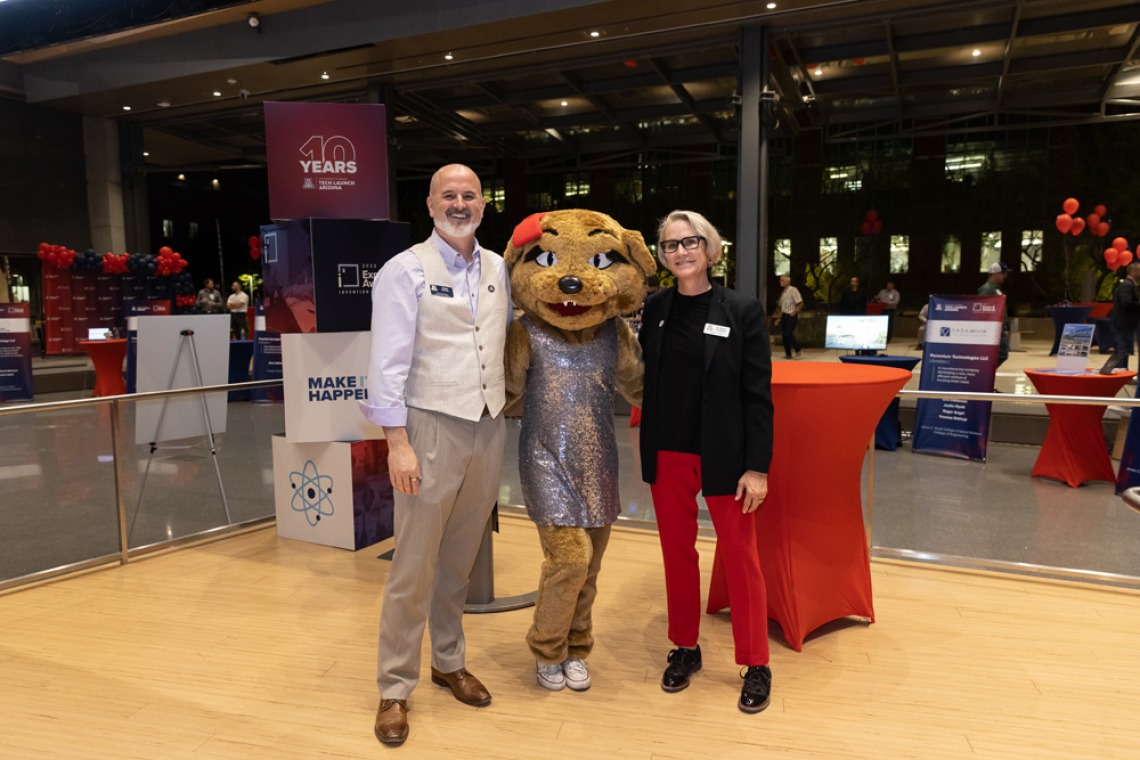 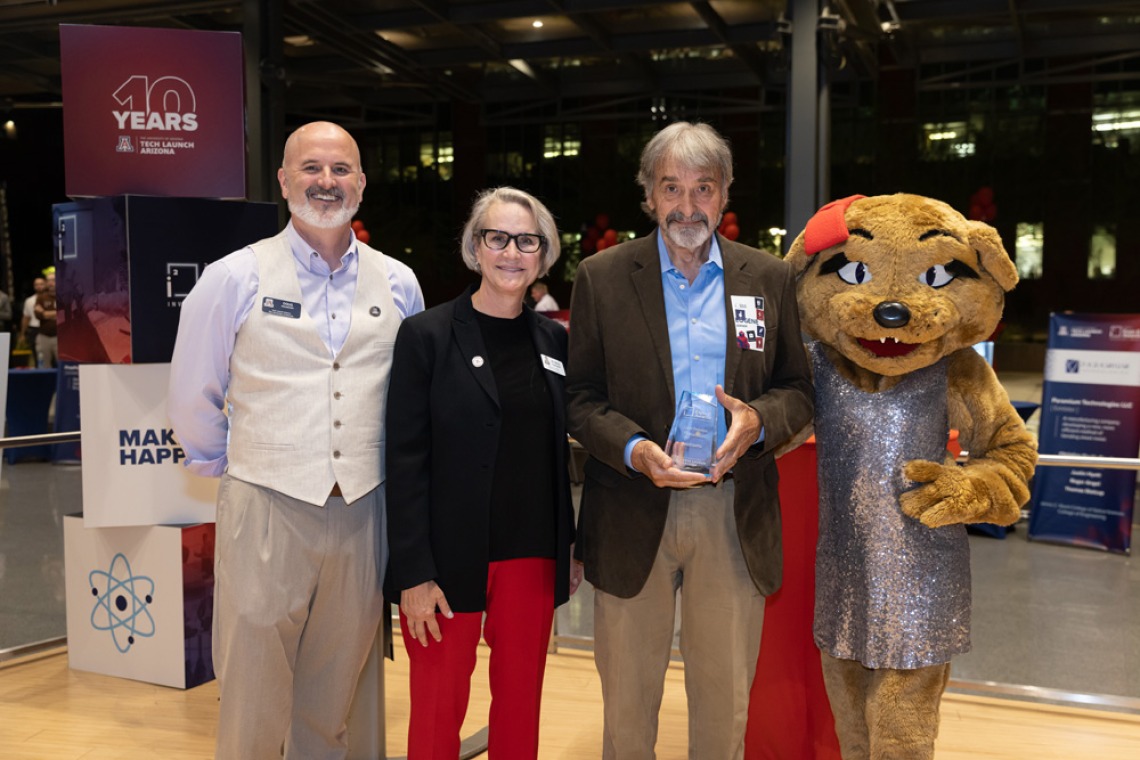 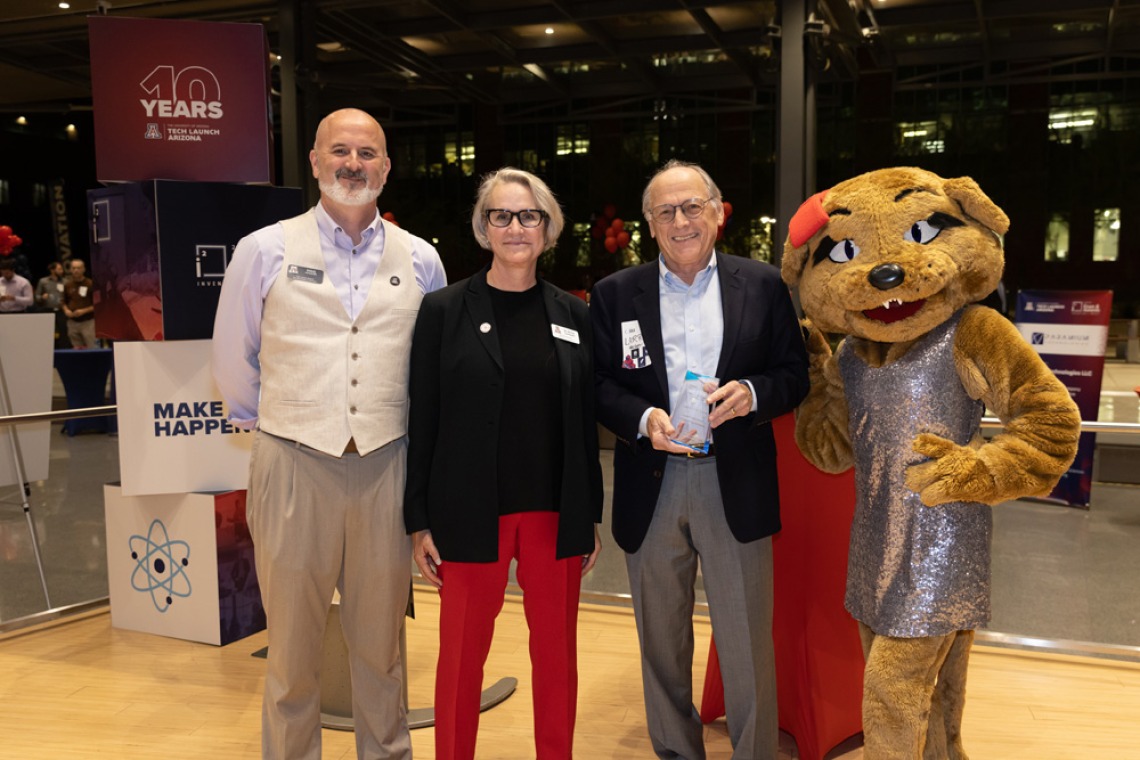 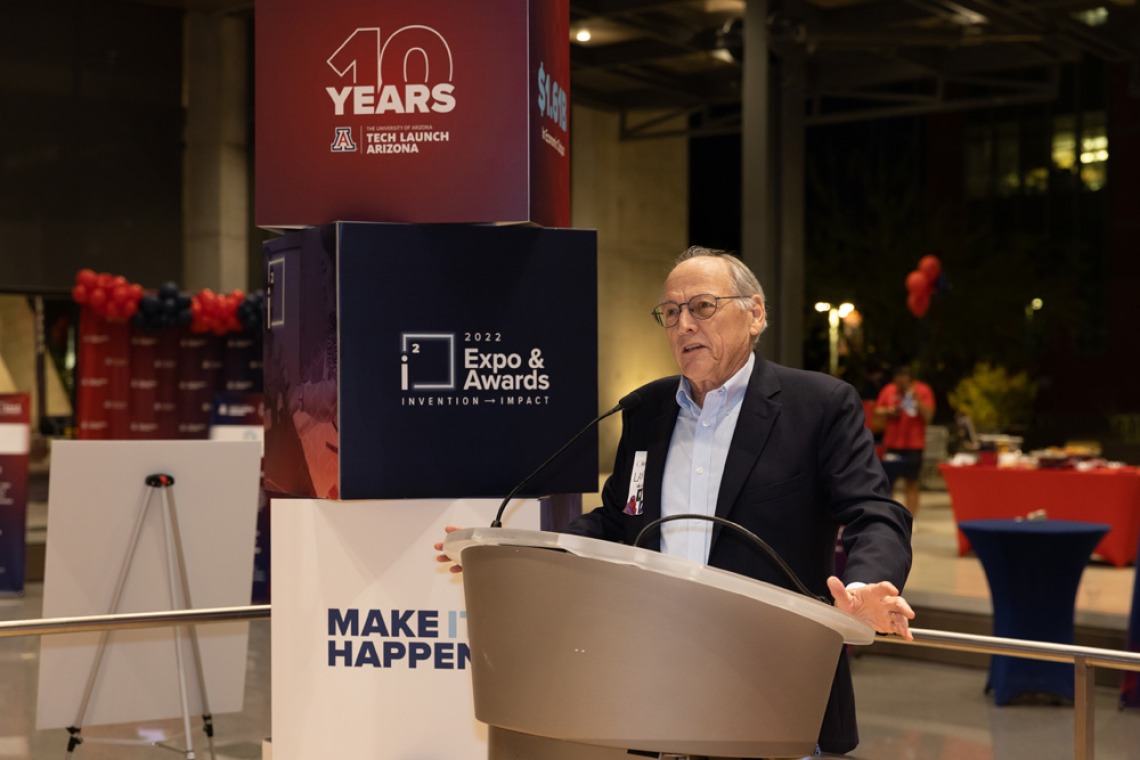 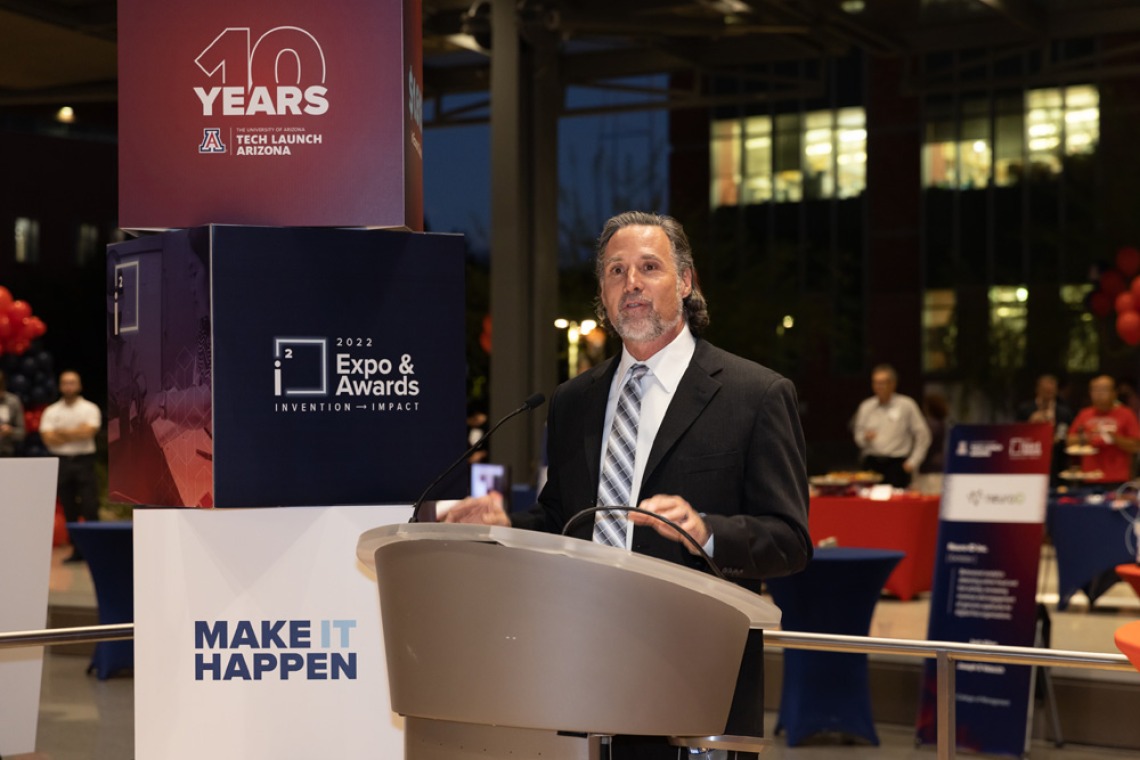 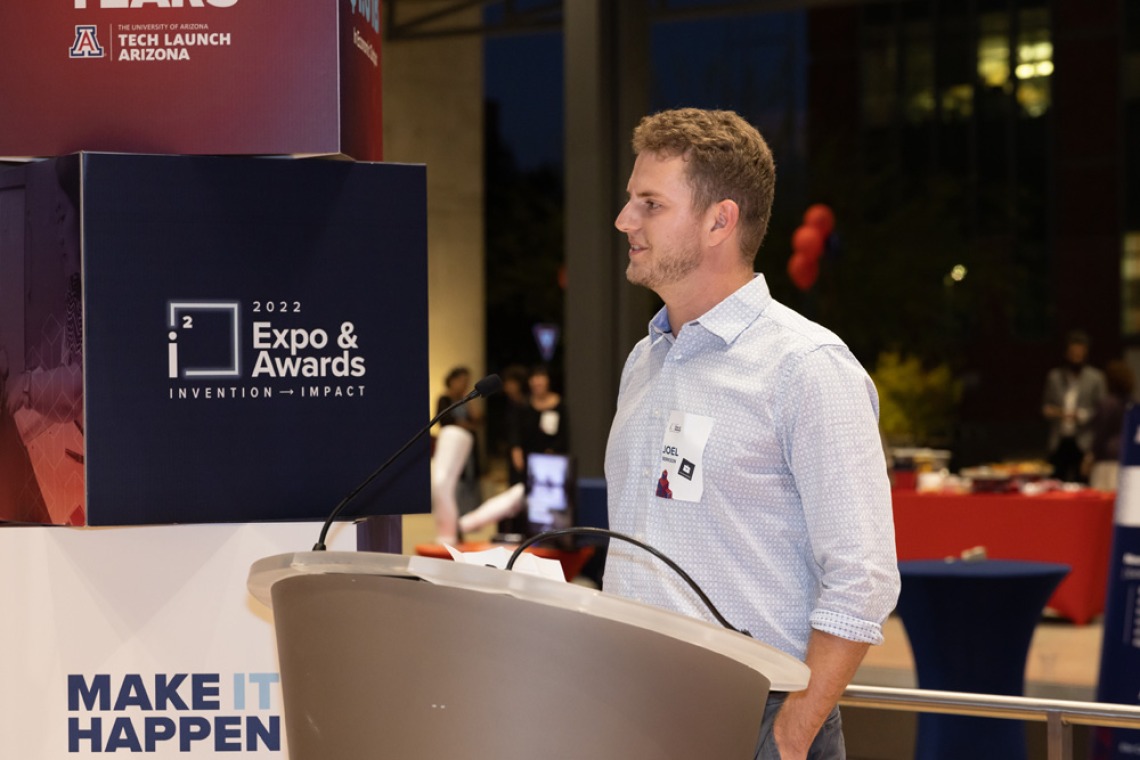 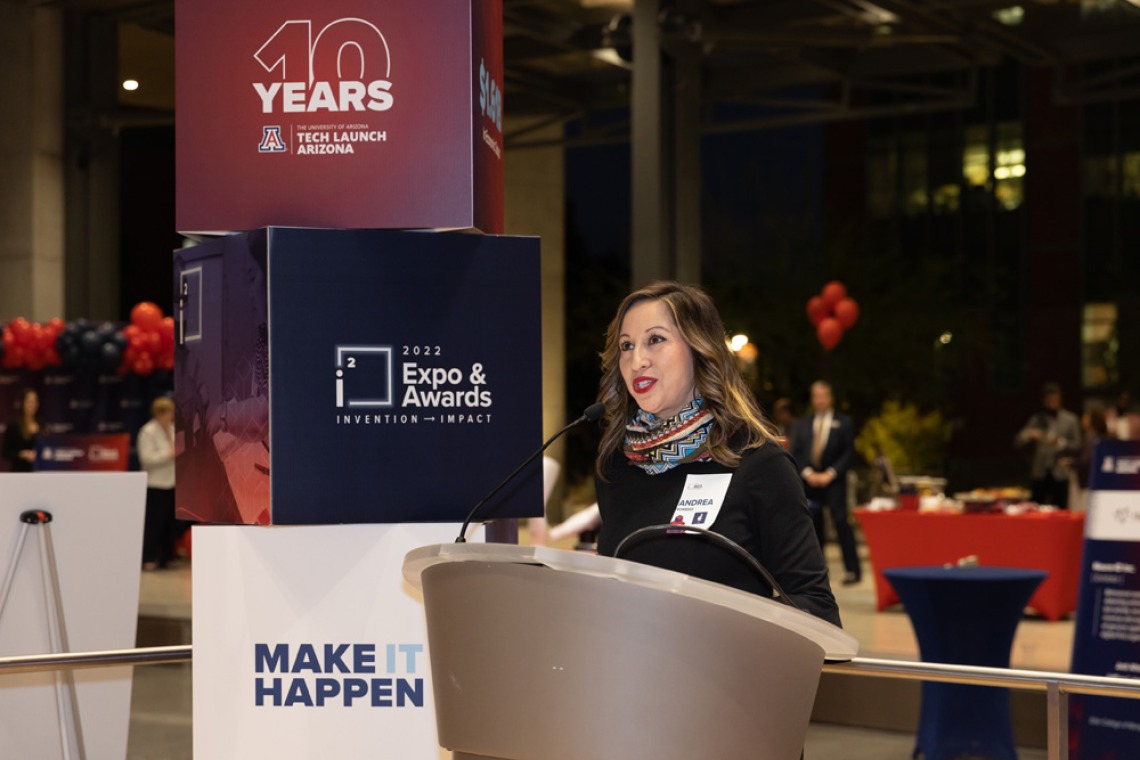 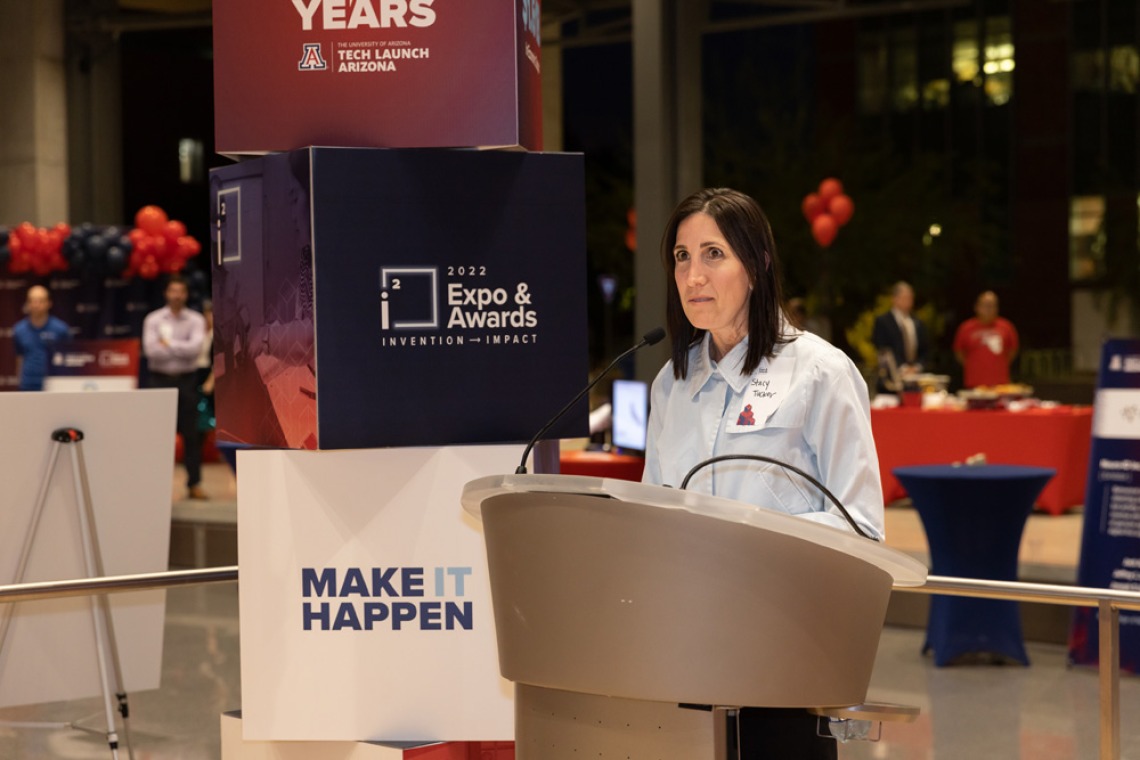 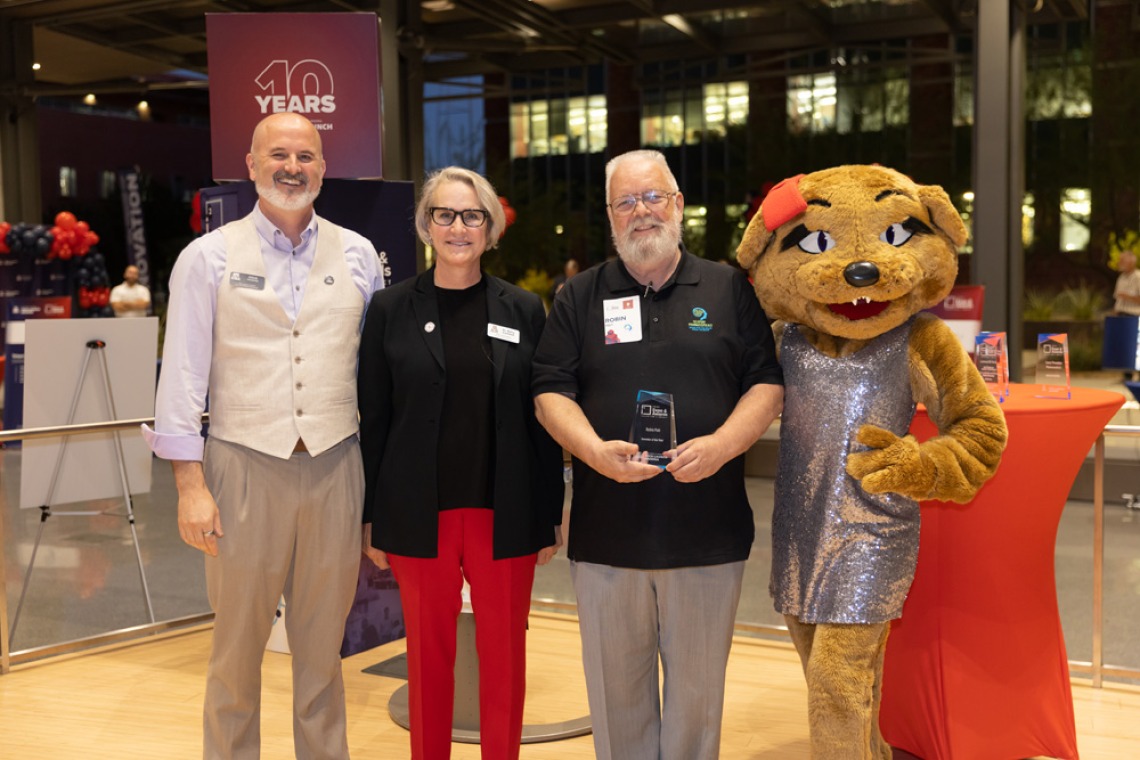 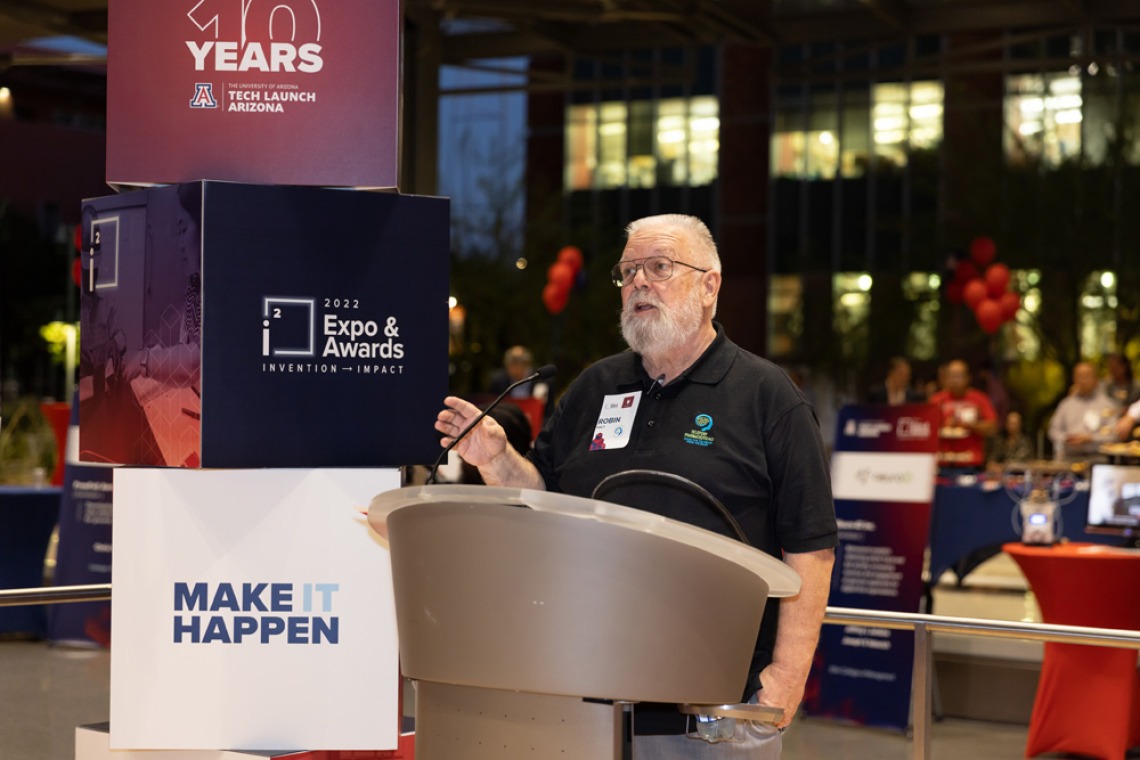 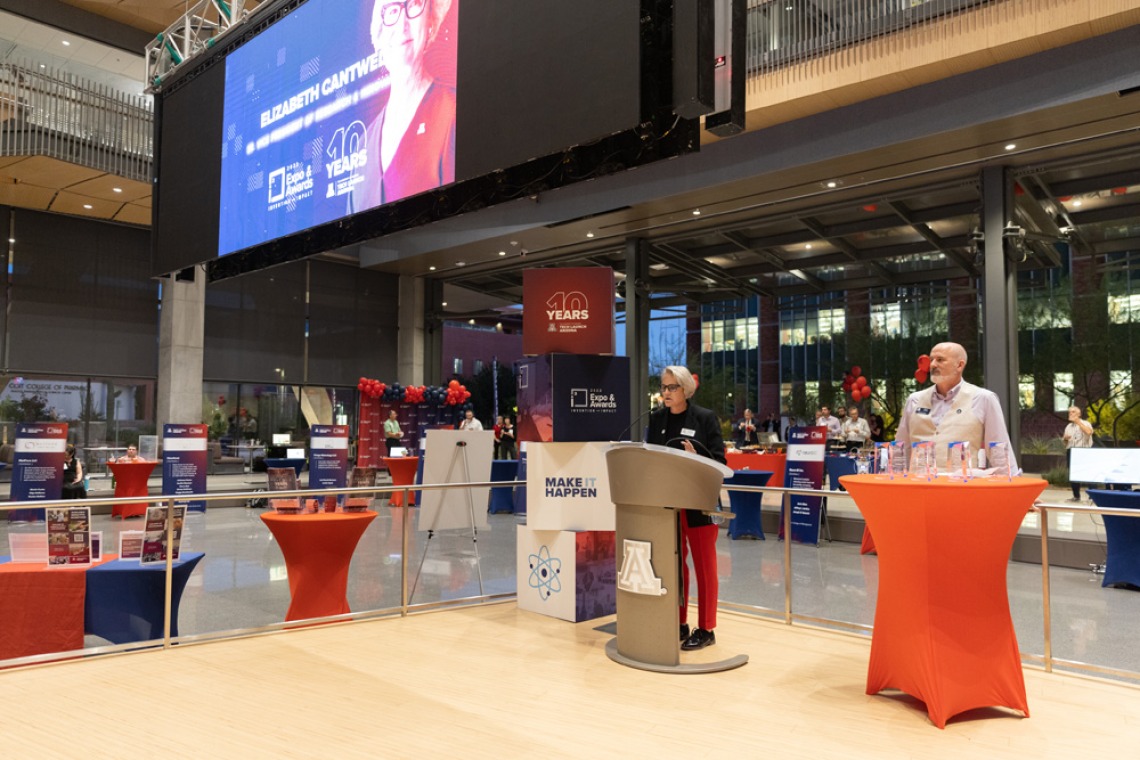 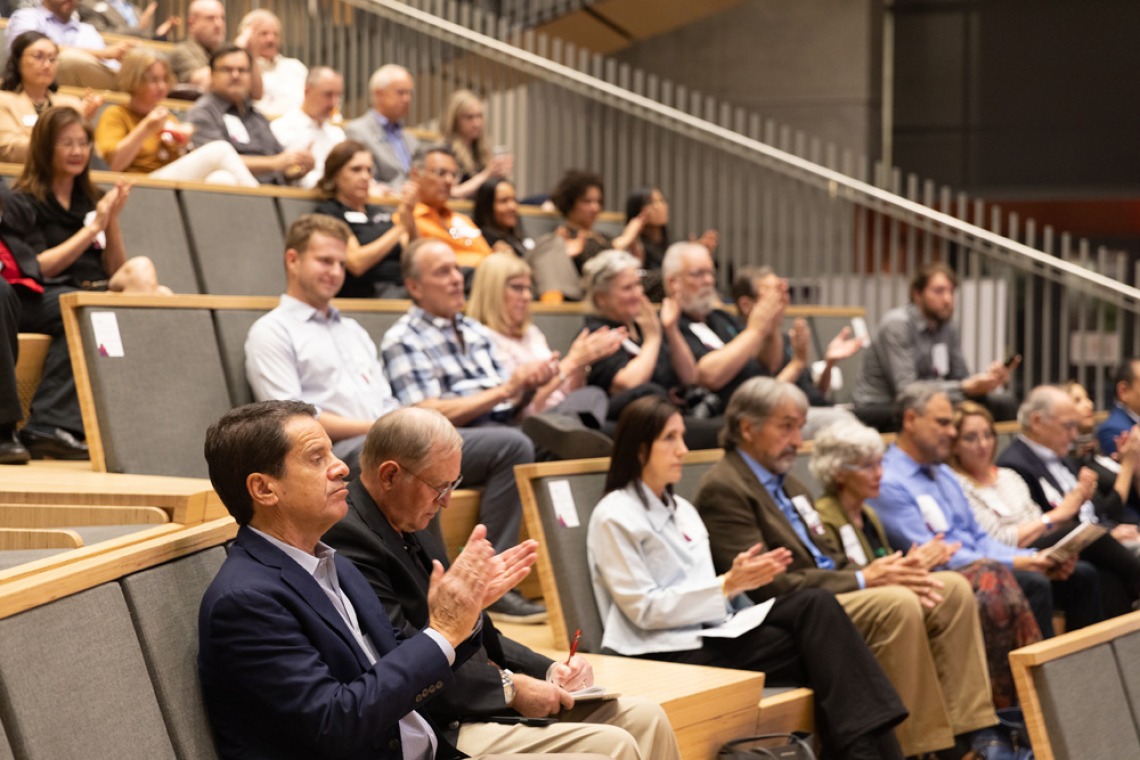 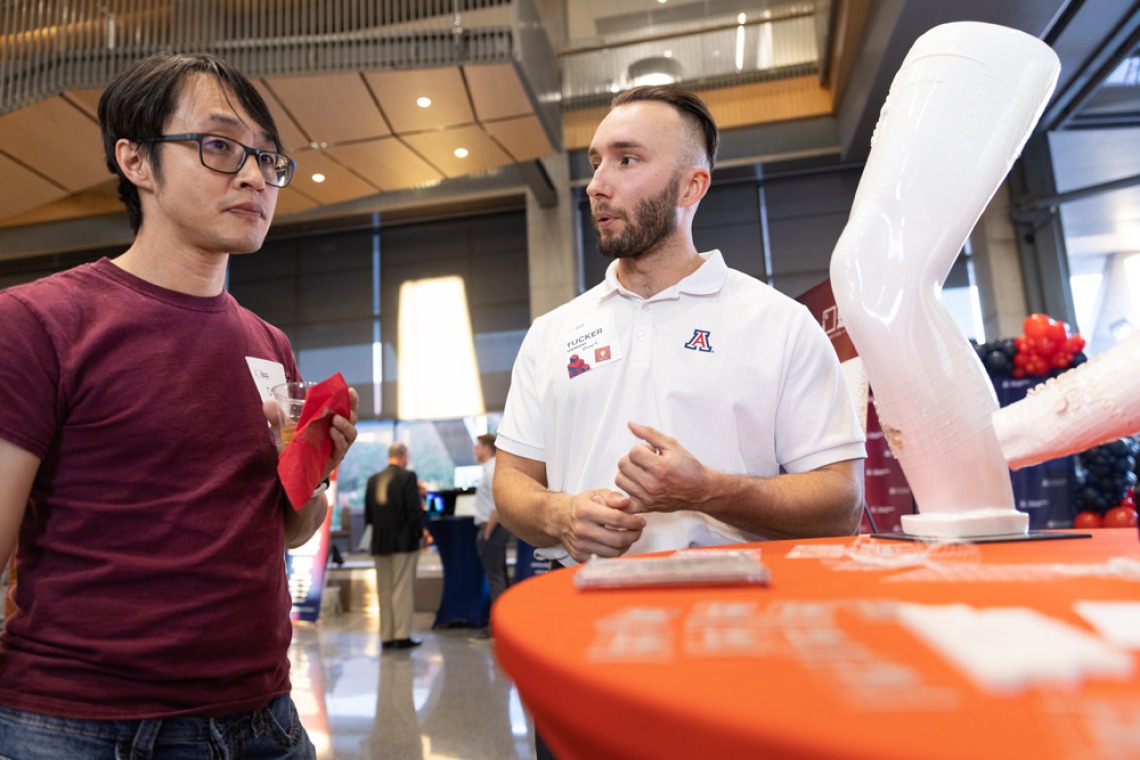 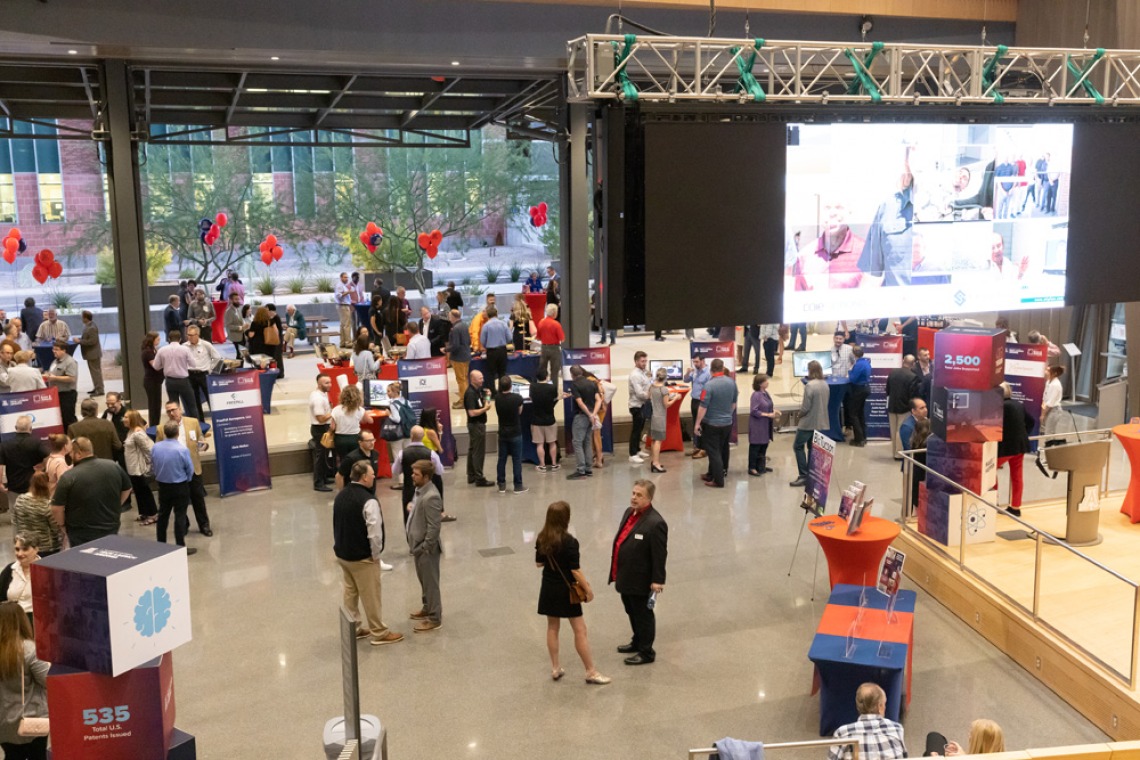 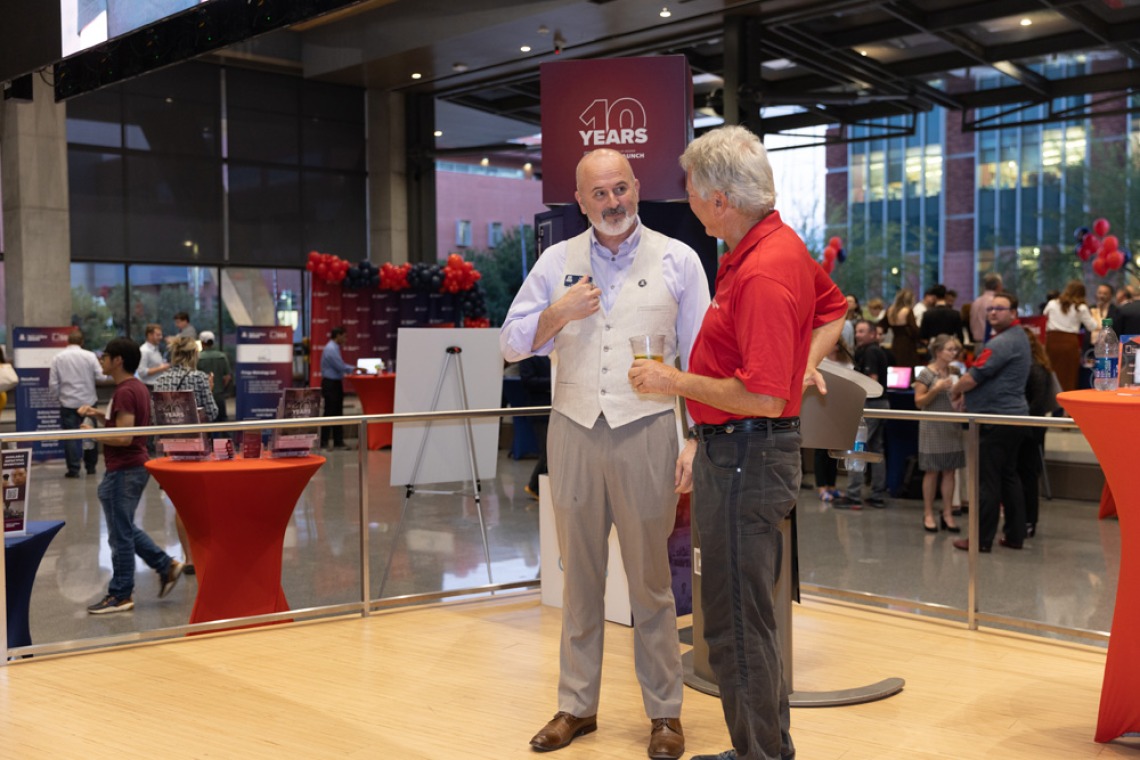 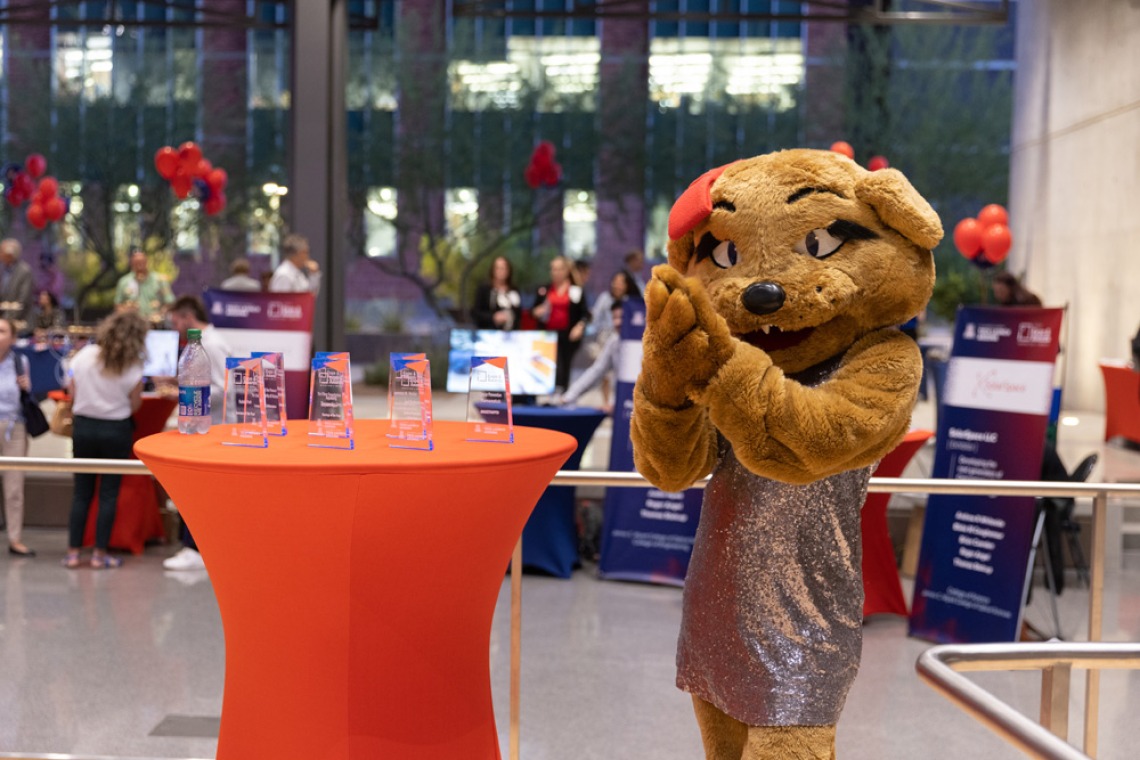 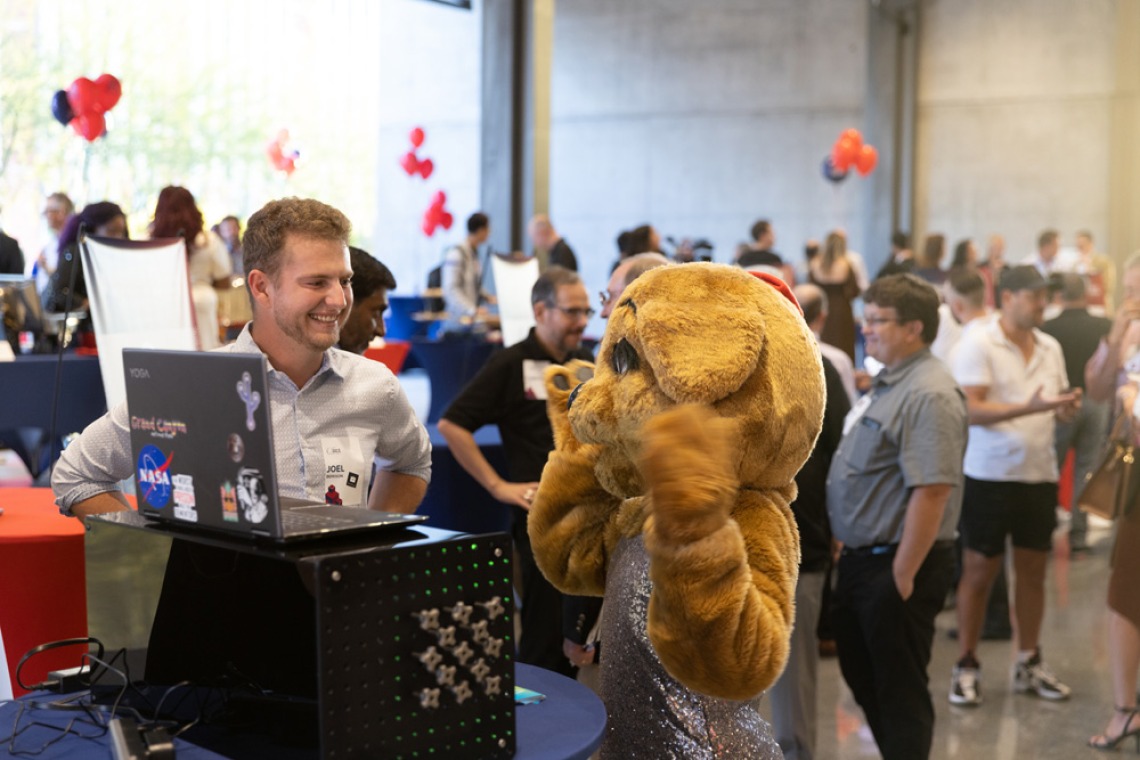 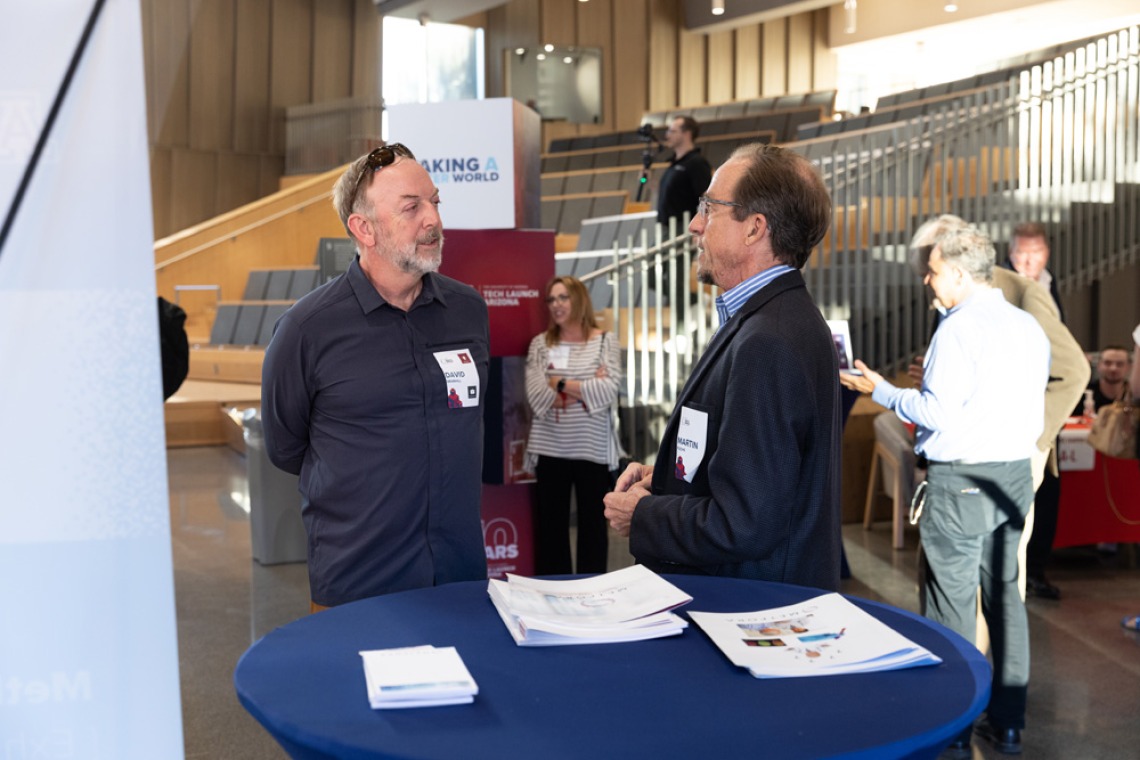 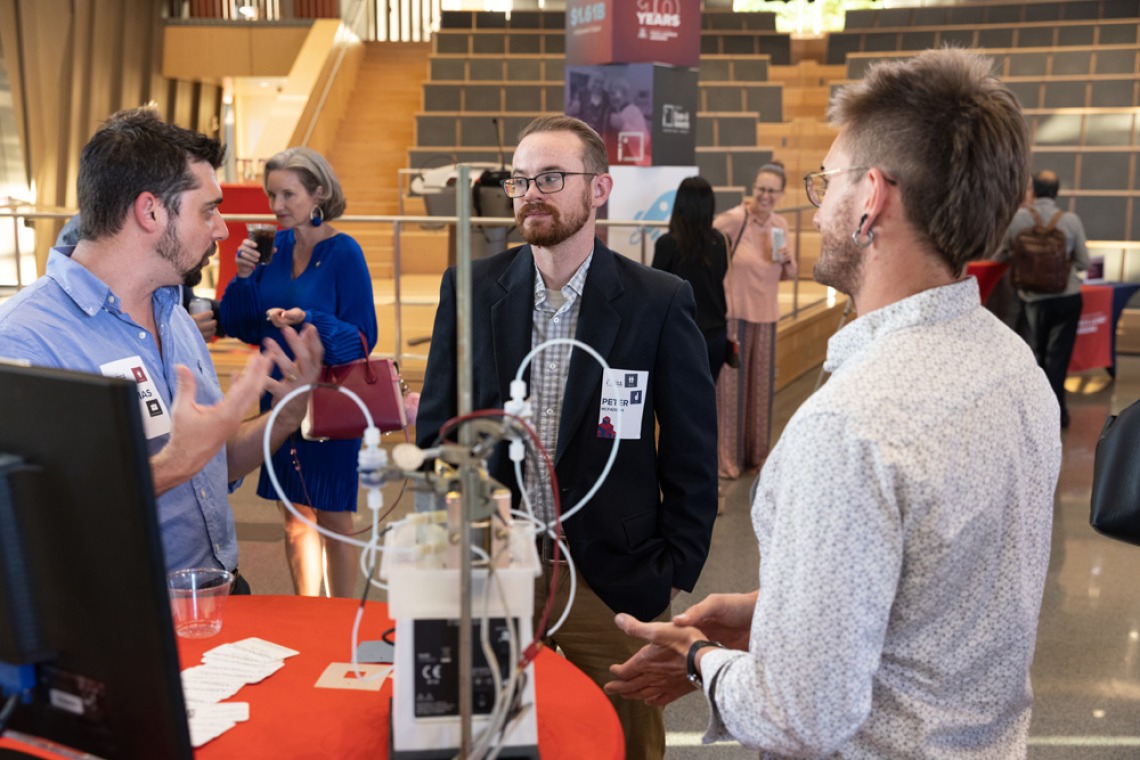 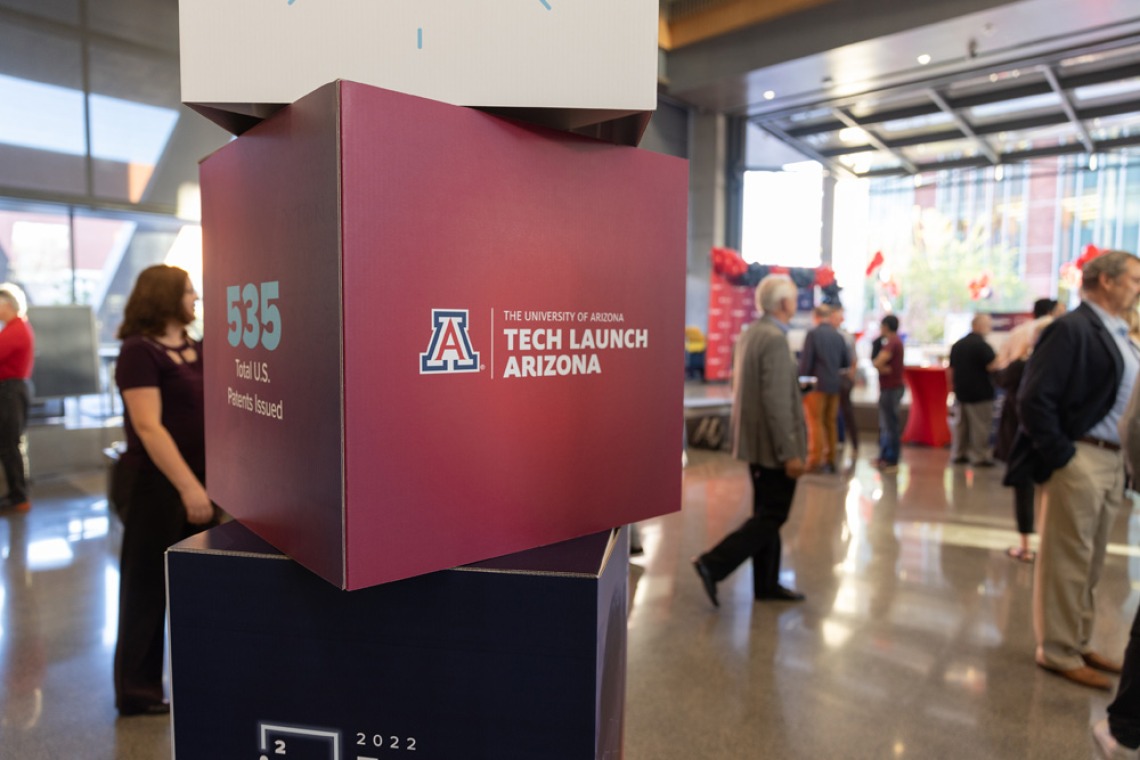