Rajesh Khanna, Ph.D., associate professor in the Department of Pharmacology, College of Medicine, delivers his pitch for Regulonix and the small molecule inhibitors for chronic pain the company is working to bring to market. Photo credit: Paul Tumarkin/Tech Launch Arizona

On April 18, 2017, Tech Launch Arizona held its fourth annual awards event at the University of Arizona Jim Click Hall of Champions at McKale Center. The I-Squared Expo & Awards honors those whose work directly affects the quality of life for people in Tucson, across Arizona and throughout the world through research, collaboration and technology commercialization.

Tech Launch Arizona is the office of the University of Arizona that creates social and economic impact through bringing the inventions stemming from UA research from the lab to the world.

While previous TLA I-Squared events honored specific individuals, this year’s event expanded the concept, including an expo that showcased eight UA startups built commercializing inventions from across the University:

“We chose to highlight these companies among dozens of others to show the how the vast range of UA research is being brought to bear down on real-world problems through commercial pathways,” said David Allen, vice president of Tech Launch Arizona.

TLA invited four of those startups – Avery Therapeutics, Regulonix, BDIAB and Reglagene – to deliver 10-minute company pitches to a room of about 100 people and then answered rapid-fire audience questions.

“They all have great stories to tell; it was hard to choose just four to pitch, but time was limited,” he said. “They all did a wonderful job.”

The teams who pitched will also be traveling with Tech Launch Arizona to Silicon Valley the first week in May to tell their polished stories at TechCode, a global startup incubator that TLA has partnered with to increase the reach and effectiveness of UA inventions and startups.  Through TechCode’s global network these teams will gain international exposure.

In ceremony following the expo and pitch sessions, Allen presented five UA faculty, researchers and teams, and one community collaborator, with awards for excellence as inventors and effectiveness as TLA partners: 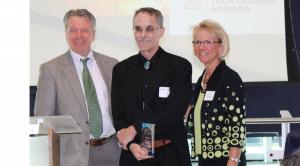 Douglas Loy, Ph.D., holds a dual appointment as professor of Chemistry & Biochemistry in the College of Science, and professor of Materials Science & Engineering in the College of Engineering. He is a prolific inventor, with 15 inventions to his name, ranging from florescent epoxies to sunscreens to antioxidants. He has participated in the TLA NSF I-Corps program, and is highly engaged with TLA through Sr. Licensing Manager Paul Eynott. 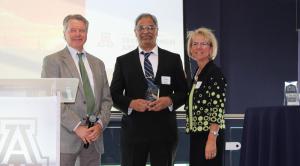 Vijay Gokhale, Ph.D., is the Director of Computational Chemistry at the University of Arizona BIO5 Institute’s Drug Discovery and Development initiative. As a research-track professional, he has worked with TLA and a number of PIs as a co-inventor on multiple projects related to drug discovery.  Vijay primarily works with the Biomedical team directed by Rakhi Gibons, TLA’s Associate Director for Biomedical Licensing.

Startup of the Year: MetOxs Electrochemical 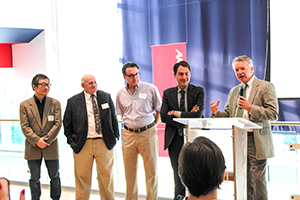 MetOxs Solutions is managed by Abraham Jalbout, Ph.D., an entrepreneur who understands both business and science. MetOxs has licensed a few technologies from the UA to address environmental and energy issues in mining, with a long view toward making the industry more sustainable. Technologies MetOxs has licensed include molten salt metal extraction methods and systems, heat recovery systems, and corrosion sensors (invented by Abe Jalbout, Dominic Gervasio, Hassan Elsentriecy, and Perry Li of the College of Engineering) and the HexoPanel (developed by Moe Momayez, College of Engineering). Along with starting the subsidiary Caltrode for commercializing the sensors, MetOxs recently started subsidiary Acrete based on a novel, fly ash-based substitute for concrete invented by Jinhong Zhang (College of Engineering). Jalbout continues to be a highly-engaged UA partner, always looking ahead to more discoveries, inventions and opportunities for collaboration. Photo: The MetOxs inventor team receives their I-Squared award. From right to left: Jinhong Zhang, Dominic Gervasio, Moe Momayez, Abe Jalbout and David Allen. Photo credit: Paul Tumarkin/Tech Launch Arizona.

Campus Collaborator of the Year: McGuire Center for Entrepreneurship 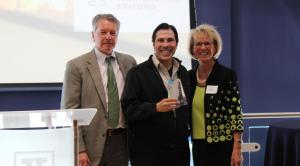 The McGuire Center of Entrepreneurship at the Eller College of Management has been an indispensable partner in TLA’s execution of the NSF I-Corps program at the UA, and with the entrance of Remy Arteaga as Director, that relationship has only become stronger. As McGuire educates students, they sometimes pursue business plans centered on UA technologies. In these cases, TLA Mentors-in-Residence and Licensing Managers work closely with the student team and McGuire leadership for a rich, diverse, extended, cross-disciplinary team. 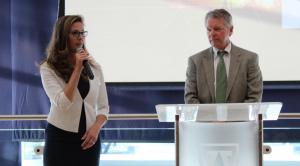 Koller is Chief Executive Officer of Northwire, Inc., and a highly-engaged volunteer TLA Commercialization Partner. She is an active participant in our weekly round-table discussions related to technology advancement, and has served as a mentor for NSF I-Corps teams. She is a proactive supporter of TLA projects, working closely with us to make connections, and is an overall enthusiastic contributor to the TLA mission.

“We are delighted to have such a broad network of collaborators across the University, intellectual property and business communities assisting TLA,” said Allen. “Such a network is enabling TLA to scale its activities and impact.”